Virtual On is a fighting game in which you pilot your Virtuaroid (VR) against an opponent's and try to best them. The grand prize is fabled hot dog picnics. I hear their hot dogs are really good. There are no ants, either! 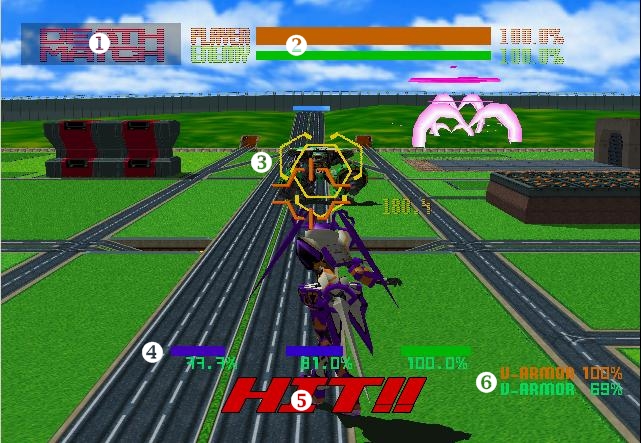 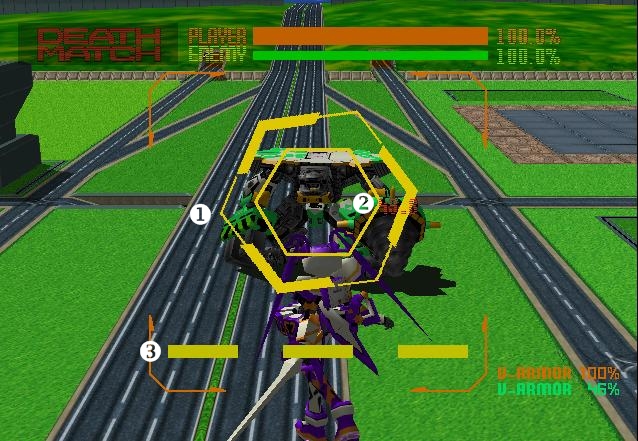 There are three different control configurations in VOOT. They are Standard Type, Twin Stick Type A, and Twin Stick Type B. Twin Stick types mimics the controls used on arcade machines. Standard type is more suited for using XBOX controller.

Here is a table of default controller configurations:

Please note that the configurations are customizable. You may use NO USE buttons for something else. However, both sticks and D-pad (also Twin Stick Type B's XBYA buttons) are not customizable.

Twin Sticks type may be recommended to use since it simplifies lots of techniques to lever presses. Standard is okay for beginners to start with, although certain techniques with Standard may be more difficult to perform than Twin Sticks. In the end, it may be personal preference as long as the user acknowledges the pros and cons of using either types.

VR rotates around. On Standard type, pressing up or down on right stick does nothing. As for twin sticks type, it may be confusing for beginners, but here's a trick. Imagine the levers are your shoulders, move left shoulder forward and right shoulder backward, you turn to the right! And vice versa!

VR jumps. Jumping in this game is a very important technique because VR also turns automatically to face and lock on their opponent. VR also can double jump again by doing the jump command again only on their ascent (may not double jump if at the peak of jump, descenting, or air dashing.) VRs can also slow down their descent with Jump.

Another important technique widely used very frequently. VRs cancel their jump with immediate descent. Taking advantage of jump's auto-turning, VRs may cancel jump mere inches off the ground to instantly face opponent's location. VRs can also speed up the descent with Cancel Jump. If VR attempts to Cancel Jump on the ground, they will not visibly crouch. It will be explained later on.

VR attacks with left-handed weapon. Usually it is a bomb of some type or something different from right hand weapon.

VR attacks with center weapon. They define the VR's individuality. It is usually a powerful attack.

Simply use weapons while standing or walking.

VR will do a crouching animation and attacks. It is usually different looking attack from standing/walking attacks. You may also execute sliding attack by strafing left or right, then immediately do crouch attack, the VR will slide along the ground and attack at the same time. The main advantage of doing sliding attack is actually moving while attacking, so VR will not be a sitting duck when it attempts to attack.

Left Turbo attacks are usually seemingly weaker version of normal weapon attacks. However, they are usually exceptional on stripping large amounts of V-Armor, which will be explained later, or doing special properties unique to certain VRs.

Only Specineff has a center weapon that uses both turbo. If any other VRs attempts to do both turbo attacks, only the left turbo attack will be executed.

All VRs have an ability to dash in any direction. It is much faster than walking normally. They dash in one direction for set period of time. Some VRs have short dash, some VRs have long dash.

Same as ground dash but it is executed in the air. When dash ends, VR will begin their descent to the ground.

VR may stop their mid-dash by pressing turbo button again. Works on ground and in air.

An important dash technique that enables VR to change their dashing direction in middle of their dash. It is important to know that the movements have to be neutral before pressing another direction. VRs may only change direction that is 90 degrees of their original direction. For example, VRs may change from left dash to forward dash or back dash, but not to right dash. VR is able to keep doing Watari Dash mutliple times in one dash, though it may be easier for some with long dash and harder for those with shorter dashes. Works in air, too.

It is named after Juno Watari, a creator and producer of Virtual On series.

VR is able to turn manually while dashing, it can be useful for keeping opponents in sight while dashing. Works in air, too.

VR performs a dashing attack. It is typically different from standing attacks. Even the direction of dash determines different attack types from each weapon. Typically forward dash attacks are the strongest but risks getting shot in the face. Left and right dash attacks are moderate in attack power yet it has more evasion than forward dash. Back dash attacks are weak and generally not worth using it at all, with few exceptions of course (AJIM for example).

Dash attack is also important to use because it will auto-turns VRs to face their opponent before attacking. Note that VRs will have different turning speeds before attacking, so some attacks may miss or not, depending on how much VR had to turn and how late they will attack after the start of turn. This is very useful if you dash towards the cover and use the attack to gain your sight on opponent at the same time.

VR performs a dashing attack with sliding animation. It may be used to duck under certain projectiles or reduce incoming attack's damage slightly. It is usually slightly weaker than normal dashing attack counterparts, though some attacks may have different properties.

It is the same as Dash Attack except in air. VRs begins their descent to ground after performing it.

This technique is explained in this link.

Beginners are encouraged to give their VRs a try in Training Mode and in Arcade Mode to get the feel on their characters! Aim high, get good hot dogs!

Retrieved from "https://voot.fandom.com/wiki/Beginner%27s_Guide?oldid=3997"
Community content is available under CC-BY-SA unless otherwise noted.